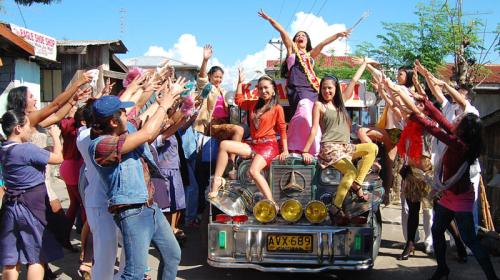 There are movies that can compel you to sit through it not because they are fine and entertaining films but because you’re concerned about the money you spent to buy the ticket. And at the back of your mind, you keep on telling yourself, this film will get better, might as well stay until it ends.

This should not be the usual scenario when we talk about local films since most if not every local filmmaker believes that he or she is a cut above the rest, thus the industry must produce high quality stories that don’t dwell too much on sexuality and violence.

In its effort to treat local theatergoers with high-quality films, the Film Development Council of the Philippines (FDCP), in association with the Cultural Center of the Philippines, announces the production of an original Filipino musical called Emir. Originally written for the screen, it is a full-feature Filipino movie musical helmed by critically-acclaimed director, Chito S. Roño.

With a 30 million peso budget, one of the redeeming qualities of the film is the set design. Shot mostly in Morocco (featuring the cities of Marrakech, Ourzazate and Essaouira) and in the Ifugao province, the plot revolves around a Filipina nanny Amelia (played by Frencheska Farr), who decides to work abroad to help her family. She takes care of the Sheik’s wife who is about to give birth, and later acts as the nanny to the newly born—Ahmed, the Sheik’s eldest son.

During the press conference of the movie held at the CCP Main Theater Lobby, we learned that lead star Frencheska Farr, who can be recognized for winning GMA-7’s talent search called Are You the Next Big Star?, is not the first choice for the role.

“The original choice for the role works in New York , and because of her busy schedule, she couldn’t travel to the country and to Morocco for the shooting. But we decided to look for someone equally talented if not a better talent, and I must say that we have a magical cast,” says Roño.

All cast members had to undergo audition process to be part of the musical film and it was a formidable task for the people behind the project to choose from hundreds of singers who went to the auditions. It was only veteran chanteuse Dulce who did not try out for one of the roles because her voice and personality are tailored fit for the character she plays in the movie according Roño.

“I’m very fortunate because of the chemistry within the characters. If you would watch the movie, you will how these actors work perfectly together,” Roño adds.

To direct a musical is Chito S. Roño’s dream being inspired by the musicals and operas he had seen as a kid. The movie Emir (that literally means prince or chieftain in Arabic) however is not just about a fulfilled dream of a filmmaker; it also tackles Filipino values and the very relevant issues concerning Overseas Filipino Workers.

Inspired by true events—the gulf war and an actual meeting with a crowned prince who surprisingly speaks fluent Tagalog and Ilocano—the story of Emir is an inspirational one, revealing the triumphant and resilient side of being an OFW.

“Just like any other musical, there’s a level of unreality in the movie. It is not about showing the sad plight of the OFW in the Middle East but it is about creating a good story that highlights culture, values, and language of the Philippines,” Roño affirms.

The award-winning director, who is famous for the films like Itanong Mo Sa Buwan (1988), Eskapo (1995), Bata, bata…Paano Ka Ginawa? (1998), Dekada ‘70 (2002), Sukob (2006), among many others, hand-picked the people who worked meticulously as artistic staff for Emir. The team includes Palanca award winner Jerry Gracio as writer, Neil Daza as director of photography,  Gary Granada, Vin and Ebe Dancel, and Diwa de Leon as composers, Chito Toledo as musical director and arranger, Douglas Nierras as choreographer, and Digo Ricio as production designer.

Apart from being the first original Filipino full-length musical, Emir is also one of the first Filipino movies to use the state-of-the-art Red camera that ends the era of grainy picture quality and introduces high-definition cinema to the industry. The fully-orchestrated movie musical is also in Dolby 5.1 Digital Surround Sound.

“We have spent a lot of money for this film and we believe that it’s going to be a landmark film,” says Rolando Atienza, executive producer of Emir. “The excellence of the performance of the different collaborators of Emir raises the bar of Philippine filmmaking because it’s a kind of movie that no normal producers would do. It extends the frontier of Philippine Cinema.”

Emir is in collaboration with Viva Films and supported by the Manila Broadcasting Company.

7 responses to “A Filipino movie musical”