There is a lot to like about Subic Bay’s newest business and leisure hotel. The accidental hotel, which was supposed to be a furniture showroom, is now a handsome and a modern charmer offering something a little smarter than the former military base was used to.

First impressions are good. Behind the sleek four-story facade are white walls, grey curtains and dark wood that set off the generous proportions and high ceilings of the well-appointed rooms that occupy the hotel. The building uses green technology, each room has motion sensor led lights, the elevator (with a sofa inside) is spacious enough to accommodate recreational equipment, and everything is operated using a soft touch switch panel (including the Don’t Disturb sign). 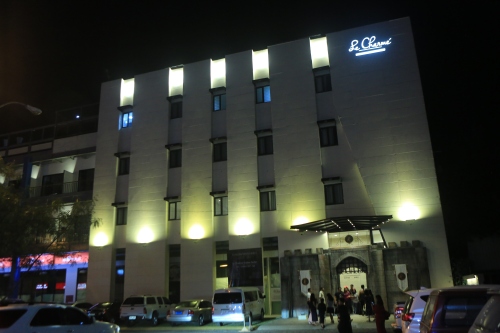 Le Charme Suites – Subic part owner and managing director Josephine Floresca stressed that the hotel is still evolving and what they have now is a model of the next hotels that they are building outside the freeport zone.

“This hotel is actually a prototype of the next projects that we’re going to have. We have plans to expand and branch out of Subic building two more hotels. As you can see, we are introducing a lot of ‘firsts’ in this hotel,” Floresca told Manila Standard. “We are very optimistic on this endeavor specially that from 40 percent occupancy rate when we opened early this year, we are hitting 90 percent during peak seasons.”

Designed based on the principles of luxury and convenience, Floresca maintained that the hotel caters to travelers, mostly foreigners, businessmen and sports enthusiasts, visiting Subic Bay. It boasts 45 stylish rooms (with a generous space of at least 40 square meters of floor area fitted with a bathtub and a separate shower area), a spin class fitness center, a teppanyaki and a Filipino-Hispanic restaurant, a milk tea cafe, a karaoke and virtual reality (VR) entertainment center, and a roof deck half-Olympic sized swimming pool which gives guests an almost 360-degree view of the freeport zone. The roof deck also features an events area that can accommodate up to 200 guests. 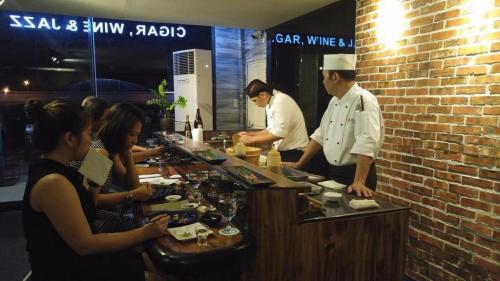 “There are only three things that most people look for in a hotel where they would want to stay at: first and foremost is the food choices, second is the sleeping convenience, and finally, the three letter word that starts with an ‘s’.”

This was how Floresca started her welcome remark, which somehow had broken the ice and made the tour a bit more relaxed because it was as if someone was welcoming some distant relatives to her home, giving every detail of the building, its embellishments and furniture, whilst throwing some jokes in between.

“You dirty mind, I was referring to spa,” she immediately retorted after getting different answers from our group. “You’ll have that later in the afternoon.”

Floresca explained that the entire hotel was built based on the kind of convenience that she wanted to experience when she travels either out of town or overseas. She said that after a long haul or land trip, she always wanted to have a great meal, a relaxing massage, and then a nice to sleep.

According to Floresca, since their opening in March, it has been their tradition to stage seasonal events and decorate the entire hotel based on the theme. This time, the hotel put on a medieval Halloween look. Its entire third floor was transformed into a spooky hall where the Grim Reaper greeted the visitors.

“We want to give our guests a different kind of experience each time they come to our hotel. When our guests come back in Christmas or summer season, our goal is to make them feel as if they have come to a different hotel,” she explained.

She further said that Subic Freeport has always attracted local tourists because it gives them an out-of-the-country feel yet it is so accessible being only a few hours drive from Metro Manila.  And since Subic Bay is the country’s top sport tourism destination — hosting triathlons, fun runs and other sports events throughout the year — each room at Le Charme is fitted with bike racks, which most triathletes look for in a hotel whenever they’re in the former military base.

“We also want to target quite a number of triathletes, cyclists and nature adventure seekers visiting Subic each year, and so we opened spin bike classes at our fitness center and installed a bike rack in every room so our guests could safely and conveniently park their bikes and gears. Soon we shall be offering a massage and spa service especially tailored to fit the needs of athletes,” Floresca added.

Le Charme promises excellent accommodation, great food and professional, personalized services to its guests so they could do whatever they have come to Subic for — whether work or business and leisure.

“The name of our hotel is French for ‘charm’ or ‘a charmer’ and that’s exactly what we aspire to do. We wanted to entice both local and foreign tourists especially those who are tired of the hustle and bustle of the city and are looking for a place to unwind and relax or seek adventure in this part of the country,” Floresca ended.