Ten-year-old Filipina Gwyneth Dorado wowed the judges of Asia’s Got Talent in the premiere of the regional version of Got Talent franchise aired last week.

Judges Mel C of Spice Girls, Indonesian chanteuse Anggun, F4’s Vanness Wu and composer David Foster were impressed with the young talent who played the guitar and sang Katy Perry’s “Roar.” Her audition piece earned her a standing ovation from the audience and judges Mel and Vanness. The Indonesian singer quipped and told her fellow judges that they better watch out for their respective careers. David, on the other hand, gestured a nod of approval and said, “I think this business has a place for you.”

Gwyneth’s performance was just a sneak peak of what Filipino talents can offer to the show because to date the biggest performance seen in the reality search came from a dance crew based in Manila. The video of their performance took social media by storm shortly after they appeared in the program on Thursday. It has also become the most-watched video on the official YouTube channel of Asia’s Got Talent.

Called the Junior New System, the dance group set the bar really high for being the first act to showcase their talent on the show that is being broadcast in fourteen different countries in the region.

The nine-member group, which took the stage in camouflage vests, started their performance with snappy acrobatic and bboy stunts before making everybody in the audience area cheer for their Beyoncé-like moves. At the end of their production, the audience, including the four judges were on their feet giving the group a big round of applause.

More than their flair on the dance floor, the judges were amazed on the attitude the young dancers showcased while performing.

“So often we see a dance group and there’s a couple of people that might be a couple of weak link, even if it just is in their faces. Every one of you is equally brilliant,” Mel C enthused. 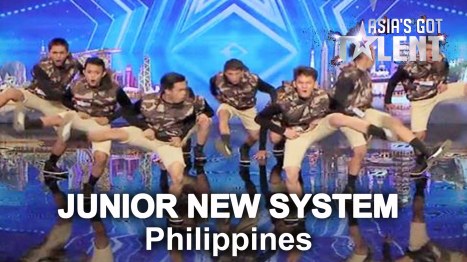 Meanwhile, the Canadian music producer-composer commented, “There’s not an act in America, from Beyoncé on down, that wouldn’t love to have you guys behind her.”

The judges’ reaction on the performance of these Filipino acts is a concrete evidence that local talents can make waves on global scene given a chance. We just need to do away with the drama (highlighting poverty why they joined the show) and let the talent alone to stand as the unique selling point to woe the judges and eventually the audiences and viewers who will play a big part in choosing the winners.

Like Loading...
This entry was posted in Entertainment, Television and tagged Asias Got Talent Filipino Contestants. Bookmark the permalink.