A not so ‘Crazy Beautiful You’

Over the weekend, out of curiosity, my friends and I decided to watch  Star Cinema’s Crazy Beautiful You, a rom-com with Daniel Padilla and Kathryn Bernardo.

First, we were tempted to watch the romantic teen flick because it was being shown on two screens (so Kingsman: The Secret Service had to wait) and according to ABS-CBN news, it earned a whopping P32 million on its opening day (it has surpassed the 100-million-peso mark in terms of gross revenue as of this writing) so that gave us the impression that the movie must have something interesting to offer.

It turned out, after sitting through the movie, this KathNiel rom-com is another cash cow that banks on the onscreen chemistry of the two leads.

The movie starts off pretty on track, bursting upon the silver screen with a very familiar formula, until a few conflicts arise that get resolved in an instant. Like the title implies, this film is a mish-mash of all the silly clichés that make teen movies what they are – shallow juvenile romance that tries to bend some logic in the real world.

Crazy Beautiful You revolves around the story of Jackie (Kathryn), a rebellious child forced by her mother (Lorna Tolentino) to immerse herself in a medical mission in Tarlac. There, she meets a jolly lad named Kiko (Daniel), the illegitimate child of the city mayor. The two fall in love, of course, in a span of a few days.

Also in a span of a few days, Jackie undergoes drastic character transformation from being stubborn to a sweet girl-next-door type. A few revelations along the way and a sudden inclusion of sibling rivalry, the movie climaxed with everybody being given a second chance just after saying sorry. Even domestic conflicts like the tension of being with an abusive former husband again in the same room is no longer a big issue. 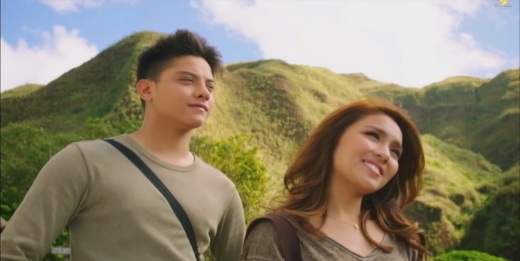 That’s the Star Cinema rom-com for you. For any consolation, Kathryn and Daniel are really fun to watch. They are giving what the script is asking for.