Triple MP Productions’ “Overture,” directed by Perry Escano, is one of the featured closing films and is in competition in the International Film Festival Manhattan in New York City.
“Overture” tells the story of  two best friends who are obviously in love with each other but both are in denial about their feelings, afraid to get hurt and destroy the precious friendship that they share. 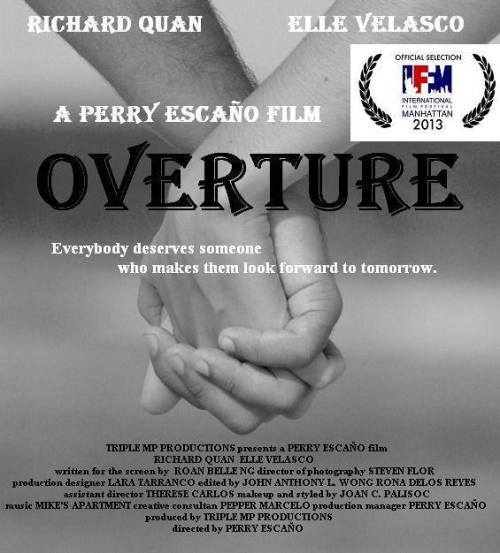 “My friend Roan Belle Ng  wrote this script,” Escano begins. “The most challenging part for me, was to shoot it continuously, to execute it properly because this is without dialogues. I tell the story visually, making sure that I capture the friendship and the non-verbal communication that the two actors exchange.”
“I am very lucky to have Richard Quan and Elle Velasco as my actors,” states the director. “They have palpable chemistry. The camera just loves them and they were able to showcase various emotions just with their eyes, smiles and body language.”
Escano avers, ”    I am so overwhelmed and honored that my film  is representing our country for the second time around! Last year, we presented Alibi and it received so much love appreciation. I pray that Overture gets the same reception as well.”
Aside from film director,of late, he works with HPI Synergy Productions, “They hired me as Production Manager and part of their creative team for Pedro Calungsod Batang Martir film,” Escano said.
The film is an entry to the 39th Metro Manila Film Festival in December and stars Rocco Nacino in the title role.
He adds, I want to know every detail on how to make a film not only in artistic side but as well as the business side.”
His other project is the Ama Quiambao documentary “Ang Platinong Buhok” which is set to have special screenings in different schools soon.
Escano ends, “To all the Filipinos in New York, please watch and support Overture. Please give us all your love. “
The closing night of the International Film Festival Manhattan is slated on Sunday, October, 20, 2013, 7:40PM to 9PM, Anthology Film Archives, 32 Second Avenue. (@ 2nd St.,) New York,NY, 10003
Perry Escano’s “Overture” will be presented in Program 12,  together with “Game Night,” director: Sean Lynch, “Loaded” director: Andrea Williams and “Sins,” director: Ev Wolff.