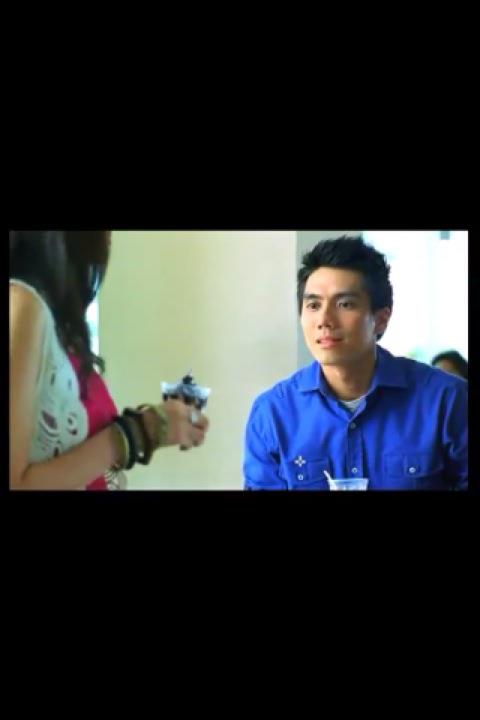 In the ad, Yamakawa impatiently waits for the arrival of his girl friend. Obviously yearning the creamy and saccharine sundae – with his facial expressions so truthful and convincing, one immediately wants to buy product.

“I give credit to my theater background, every thing becomes easy to do because of the discipline and training I got from it,” says the young actor.

Yutaka is a home-grown Gantimpala Theater talent whose training as GTF Summer Drama Workshop participant has enabled him to pursue an active and exciting career in film and television.

This versatile and handsome young actor has appeared in various Gantimpala productions, essaying a variety of roles in plays such as “Kanser” (as Padre Salvi), “El Filibusterismo” (Juanito/Padre Irene), “Bombita”(de Lara) and “Wanted: A Chaperone”(Fred). He was also part of “Ibong Adarna,” “Walang Iwanan” and “Grethology.”

“It was the late Tony Espejo, artistic director of Gantimpala, who gave me the break in Wanted: A Chaperone, he was my mentor. He prodded me to attend the workshop. Now, I am proud member of the company’s Actors’ Company,” Yamakawa shares.

This season, he returns to his mother company as the lead in “Florante at Laura” after playing Menandro and Aladin in previous seasons.
“Doing the role for the second time, I know I will do it better,” the actor avers.“Giving more than one-hundred-percent of myself, my emotions, I am playing for truth here, you know, I want the audiences to see the many trials and triumphs of Florante with the hope that they wil have a better understanding and appreciation of Balagtas’ literary masterpiece.”
“Florante is a soldier, son and lover,” Yutaka says of his role. “He loves Albania, his family, Duke Briseo and Reyna Floresca and of course, the love of his life, Laura. Every thing he does is dictated by passion with the consuming desire to do right.”
Aside from theater, Yutaka has also given life to interesting TV characters such as Jake Cuenca’s co-lieutenant (“Tayong Dalawa”), as the villainous Gadang (“Amaya”), Ka Elias (“Minsan Lang Kita Iibigin”) and in shows like “Precious Hearts Romances (Somewhere in My Heart),” “Magkano ang Iyong Dangal,” “Endless Love,” and “Stairway to Heaven.”
Recent TV roles include Sir Diego (“Princess and I”), a pivotal character, hit-and-run driver, in “Hiram na Puso”and Christine Reyes’ suitor in “Nang Dahil Sa Pag-Ibig”
For film, he was seen in “Born To Love You,” “Working Girls,” “Dekada 70,” “Corporal Histories,” “Heremias” and the upcoming “The Reunion.”
Yutaka made his debut as director last year, with his short film, “Tama (Deranged)” an entry in the Gawad CCP Para sa Alternatibong Pelikula at Video.
Playing his Laura in this production is Vera Capiral, alternate is Al Gatmaitan, with Leo Ponseca and CJ Mangahis as the Moor lovers, Aladin and Flerida.
Yutaka concludes, “For all my modest achievements, I give credit to the late and much-loved Tony Espejo, for discovering me and honing my talent.”
Florante at Laura performances are on July 29, (7pm), Concert at the Park Open Auditorium, Luneta, Manila, August 3, 4 & 5, (9am/12pm/3pm), AFP Theater, Quezon City, August 10, 11 & 12 (9am/12nn/3pm), Star City, Star City Compound, Pasay City, August 17, 18 & 19, (11am/2pm) at the SM South mall Cinema 3, Las Piñas City.
This production of Florante at Laura is fully supported by the National Parks Development Committee (NPDC) and Everbilena.
For tickets, booking information, please 998-5622. You may also visit: www.gantimpalatheater.multiply.comor like us at: http://www.facebook.com/gantimpala
0.000000 0.000000