A night of the elderly

Independent films now set the standard in local filmmaking as far as the Manunuri ng Pelikulang Pilipino (MPP) is concerned. From nominees to the big winners, independently-produced features dominated all categories in the 33rd edition of the annual Gawad Urian. 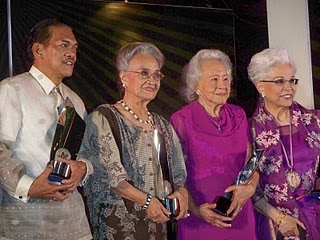 Internationally-acclaimed director Brillante Mendoza’s films Kinatay and Lola bagged the top honors in the awards night held at the University of the Philippines Cine Adarna on April 29.

Receiving the Best Director award for Kinatay, Brillante Mendoza earned a distinction for winning the same honor for three consecutive years. He first received the plum in 2008 for Tirador, and then in 2009 for Serbis.

Mendoza was not present at the awarding ceremony but daughter Angelica accepted the trophy on his behalf. According to Angelica, Mendoza is currently in Belgium.

Lola, a story about two elderly women who bear the consequences of a crime involving their respective grandsons, also took home the Best Actress trophy with Anita Linda and Rustica Carpio sharing the honor.

Another indie that walked home with several awards was Raymond Red’s Himpapawid.  The film, which is inspired by a true event following the story of a lone deranged hijacker, bagged three major awards namely: Best Supporting Actor for Soliman Cruz; Best Supporting Actress for Marissa Sue Prado; and Best Cinematography for Red.

Veteran actor Lou Veloso won Best Actor for the film Colorum, a feature by Jon Steffan Ballesteros. It is the same role that earned Veloso the Best Actor trophy in the Cinemalaya Independent Film competition in July last year. Just like his speech on that awards night, he jokingly dedicated his Best Actor honor to his leading man, Alfred Vargas.

Cited for her outstanding contribution in the film industry as an actress, producer, and industry leader, former MTRCB chairman Armida Siguion-Reyna was honored with a Lifetime Achievement Award. In her acceptance speech, Siguion-Reyna extended her gratitude to all the people she worked with in the past and recounted all the people whom she had a dispute with.

Manunuri member Nicanor Tiongson described Siguion-Reyna as someone who took on a host of major problems in the film industry to make good films and said that Filipinos will forever be thankful for her contributions.

The 33rd Gawad Urian Awards night became more splendid and glamorous with the presence of celebrities like Sam Milby, Piolo Pascual, Coco Martin, Felix Roco, and Iza Calzado. Stars who were there to perform were Christian Bautista, Mark Bautista, and Rachelle Alejandro.

Butch Francisco, a member of the MPP served as the host for the event. He was joined by television host and actress Gelli de Belen.

The Gawad Urian is an annual film awards established in 1977. The award is given by the MPP and is currently regarded as the counterpart of the United States’ New York Film Critics Circle. (That’s what they all think, but far from it.) Other members of the MPP who judge the annual Gawad Urian are Lito Zulueta, Grace Javier Alfonso, Mario Hernando, Bienvenido Lumbera, Miguel Rapatan, and Rolando Tolentino.