Another milestone for Philippine Everest team

“Great things are not done by impulse, but by a series of small things brought together.”—Vincent Van Gogh 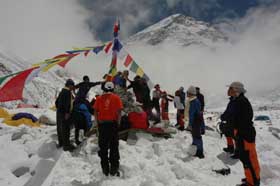 They succeeded in a great attempt to scale the world’s highest mountain and showed the entire world that Filipinos can achieve such difficult feat. Now, they want to sail across the Pacific onward to the Atlantic, all the way around the world using a replica of a pre-colonial boat.

Art Valdez, who led the first Philippine team in reaching the summit of Mt. Everest in 2006 and another all-female team in 2007, has announced another groundbreaking venture of sailing through silk routes starting next year.

The team composed of Everest climbers Leo Oracion, Erwin Emata, Noelle Wenceslao, Carina Dayondon, and Janet Belarmino-Sardena will embark on a five-year voyage that will initially travel on every port in the Philippines starting 2009.Ted Esguerra, Fred Jamili, and Voltaire Velasco complete the voyage’s core crew.

On its second year, the crew plans to traverse the silk routes of Southeast Asia, and then to Madagascar before heading to Polynesia onward to the Atlantic. The crew aims to be back home to the Philippines in 2013.

The crew will ride a balangay, the boat used by ancient Filipinos for trading and traveling, which will be crafted by master boat builders from the Island of Sibutu and Sitangkay in Tawi-Tawi starting this December. Materials to be used will come from established traditional sources in southern Philippines. The construction of the boat will take place at the back of SSS Building in Manila Bay. A viewing deck will also be constructed for the public to see the progress of the construction before its launching in April.

Balangay or the Butuan boat is the first wooden watercraft ever excavated in Southeast Asia and the first excavated relic of the boat was dated AD 320.

“This is meant to generate national awareness. We estimate the construction of the first boat to be around 90 days,” Art Valdez said during the launch of his book Live the Dream at the Captain’s Bar of the Mandarin Oriental Hotel in Makati City.

Live the Dream is a coffee table book that chronicles the first Philippine successful attempt to reach the summit of Mt. Everest in texts and photographs.

“We asked ourselves: What’s next? As a team, we are still keen in pioneering outdoor adventure, specifically adventure with a national significance. While the Philippines is a mountainous country, it is also an archipelago. Thus, it was natural for us to look to our seas,” Valdez furthered.

The Voyage of Balangay, will travel along the shorelines and to the open sea without the use of any modern equipment like GPS (Global Positioning System). It will sail using the celestial navigation method used by earliest mariners—steering by the sun, the stars, the wind, cloud formations, wave patterns and bird migrations.

“Aside from outdoor adventure, we will use the balangay trips to assist in community-building, particularly for coastal communities. We will travel along shorelines and stop at communities and key human settlements to hold seminars. We intend to heighten awareness of global warming,” the expedition leader enthused.

While ascending Mt. Everest, the team led by Valdez witnessed the ill effects of global warming. From their first visit, the Mt. Everest base camp was covered with snow. On the second year, they noticed some patches of snow around the area, and on the last year, they were saddened by the deleterious effects of global warming because snow was no where to be traced on the area that was used to be blanketed it.

“In our travels, we will share our self-image and self-assertion that the Filipinos can do the impossible. If the team can succeed on Mt. Everest without ever having seen snow or high mountain, then more so in the Voyage of the Balangay,” Valdez concluded.

One response to “Another milestone for Philippine Everest team”